Below you will find great Funny Jokes to hopefully make you crack up! My philosophy is this: You may take vitamins daily, you may workout daily - why not get Inspired Daily?

My mission is to REMIND You DAILY to stay strong and focused in Your persuit of the achievement of Your goals.

Please take a moment to see how my FREE Daily Inspirational Reminder Service can help you reach YOUR goals! 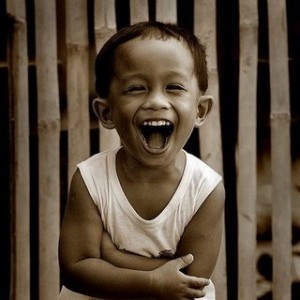 Even though you are focused and determined to achieve your goals, sometimes you just need a laugh!

One night, a father passed by his son's room and heard his son praying: "God bless Mommy, Daddy, and Grandma. Ta ta, Grandpa." The father didn't quite know what this meant, but was glad his son was praying. The next morning, they found Grandpa dead on the floor of a heart attack. The father reassured himself that it was just a coincidence, but was still a bit spooked.

The next night, he heard his son praying again: "God bless Mommy and Daddy. Ta ta, Grandma." The father was worried, but decided to wait until morning. Sure enough, the next morning Grandma was on the floor, dead of a heart attack. Really scared now, the father decided to wait outside his son's door the next night. And sure enough, the boy started to pray: "God bless Mommy. Ta ta, Daddy."

Two fellas are fishing in a boat under a bridge. One looks up and sees a funeral procession starting across the bridge. He stands up, takes off his cap, and bows his head. The procession crosses the bridge and the man puts on his cap, picks up his rod and reel, and continues fishing.

A doctor, a lawyer, a little boy and a priest were out for a Sunday afternoon flight on a small private plane. Suddenly, the plane developed engine trouble. In spite of the best efforts of the pilot, the plane started to go down.

Finally, the pilot grabbed a parachute, yelled to the passengers that they had better jump, and bailed out. Unfortunately, there were only three parachutes remaining. The doctor grabbed one and said "I'm a doctor, I save lives, so I must live," and jumped out. The lawyer then said, "I'm a lawyer and lawyers are the smartest people in the world. I deserve to live." He also grabbed a parachute and jumped. The priest looked at the little boy and said, "My son, I've lived a long and full life.

Bob was in trouble. He forgot his wedding anniversary. His wife was really pissed. She told him "Tomorrow morning, I expect to find a gift in the driveway that goes from 0 to 200 in 6 seconds AND IT BETTER BE THERE !!"

A rather confident man walks into a bar and takes a seat next to a very attractive woman. He gives her a quick glance, then casually looks at his watch for a moment. The woman notices this and asks, "Is your date running late?" "No," he replies, "I just bought this state-of-the-art watch and I was just testing it."

After all of the background checks, interviews, and testing were done there were three finalists for the CIA assasin position — two men and one woman. For the final test, the CIA agents took one of the men to a large metal door and handed him a gun. "We must know that you will follow your instructions, no matter what the circumstances.

Inside this room you will find your wife sitting in a chair. You have to kill her." The first man said. "You can’t be serious. I could never shoot my wife." The agent replies, "Then you’re not the right man for this job." The second man was given the same instructions. He took the gun and went into the room. All was quiet for about five minutes. Then the agent came out with tears in his eyes. "I tried, but I can’t kill my wife." The agent replies "You don’t have what it takes. Take your wife and go home."

We were dressed and ready to go out for the New Years Eve Party. We turned on a night light, turned the answering machine on, covered our pet parakeet and put the cat in the backyard. We phoned the local cab company and requested a taxi. The taxi arrived and we opened the front door to leave the house.

The cat we put out in the back yard, scoots back into the front door. We didn't want the cat shut in the house because she always tries to eat the bird. My wife goes out to the taxi, while I went inside to get the cat. The cat runs upstairs, with me in hot pursuit. Waiting in the cab, my wife doesn't want the driver to know that the house will be empty for the night.

A manager at Wal-Mart had the task of hiring someone to fill a job opening. After sorting through a stack of resumes he found four people who were equally qualified. He decided to call the four in and ask them only one question. Their answer would determine which of them would get the job.

The day came and as the four sat around the conference room table, the interviewer asked, 'What is the fastest thing you know of?' The first man replied, 'A THOUGHT.' It just pops into your head. There's no warning. 'That's very good!' replied the interviewer. 'And, now you sir?', he asked the second man. 'Hmmm...let me see 'A blink! It comes and goes and you don't know that it ever happened. A BLINK is the fastest thing I know of.' 'Excellent!' said the interviewer. 'The blink of an eye, that's a very popular cliché for speed.' He then turned to the third man, who was contemplating his reply. 'Well, out at my dad's ranch, you step out of the house and on the wall there's a light switch.

When you flip that switch, way out across the pasture the light on the barn comes on in less than an instant. 'Yep, TURNING ON A LIGHT is the fastest thing I can think of'. The interviewer was very impressed with the third answer and thought he had found his man. 'It's hard to beat the speed of light,' he said. Turning to BUBBA, the fourth and final man, the interviewer posed the same question.

Things to do on an Elevator:
1) CRACK open your briefcase or handbag, peer Inside and ask “Got enough air in there?”
2) STAND silent and motionless in the corner facing the wall without getting off.
3) WHEN arriving at your floor, grunt and strain to yank the doors open, then act as if you’re embarrassed when they open themselves.
4) GREET everyone with a warm handshake and ask him or her to call you Admiral. 5) MEOW occasionally.
6) STARE At another passenger for a while. Then announce in horror: “You’re one of THEM” - and back away slowly
7) SAY -DING at each floor.
8) SAY “I wonder what all these do?” And push all the red buttons.
9) MAKE explosion noises when anyone presses a button.
10) STARE, grinning at another passenger for a while, then announce: “I have new socks on.”
11) WHEN the elevator is silent, look around and ask: “Is that your beeper?”
12) TRY to make personal calls on the emergency phone.
13) DRAW a little square on the floor with chalk and announce to the other passengers: “This is my personal space.”
14) WHEN there’s only one other person in the elevator, tap them on the shoulder, then pretend it wasn’t you.
15) PUSH the buttons and pretend they give you a shock. Smile, and go back for more.
16) ASK if you can push the button for other people but push the wrong ones.
17) HOLD the doors open and say you’re waiting for your friend. After a while, let the doors close and say “Hi Greg, How’s your day been?”
18) DROP a pen and wail until someone reaches to help pick it up, then scream: “That’s mine!”
19) BRING a camera and take pictures of everyone in the lift.
20) PRETEND you’re a flight attendant and review emergency procedures and exits with the Passengers.
21) SWAT at flies that don’t exist.
22) CALL out “Group hug” then enforce it. --------------------------------------------------------------------------

A woman decides to do a puzzle so she grabs the puzzle and pours out all the peices and tries to put it together.... After a while of trying she gets frustrated and calls her boyfriend... Her boyfriend says: Honey whats wrong The the woman says: Im trying to put this puzzle together but I can't do it.


Whatever goals you have set for yourself: weight loss, greater health, financial freedom, less stress, better relationships...whatever is most important to YOU - I will be there with you until you have achieved them.

Consider me your Goal Achievement Personal Trainer and Coach!

When you subscribe to the FREE Daily Inspirational Reminders service, I will email you one of the following every day:


You will not be emailed any of the same exact content that is published on the site - I want to surprise you every day with new inspiring information! Also, You can always easily cancel the reminders at any time.

I have affiliated myself with some of the most amazing people who are experts in their respective fields. The experts that I recommend (or the experts that you are currently using) have the responsibility to give you the tools and guidance to make sure you attain your goals. My responsibility, as a friend, is to help you to not give up until you have what you want.


Thank you for reading my collection of very funny jokes! I update the site Daily, so please come back to see the latest additions to the InspirationalReminders.Com collection.

Recommended Resources New Inspirational Reminder Bands from InspirationalReminders.com! Click below to check out these great bands! These bands were created to help keep you inspired!